The Moon Goddesses are important in many cultures around the world where they form a central role in mythology. The moon is associated with the divine femine as in many tribal societies the feminine cycles were linked to the phases of the moon. The Moon was important in ancient calendars, helping people to measure time and to determine when the best time was for planting and harvesting crops. This fertility aspect of the lunar Goddess is reflected in large numbers of the entries below. 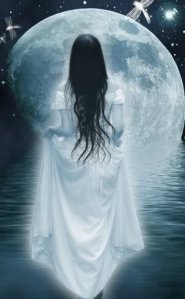 Many of the lunar Goddesses, like Hecate and Cerridwen are also associated with magic and the intuitive nature of women.

Night Deities are great to do a trio with a moon and star goddess for a triple goddess ritual!

Aega (Greek) – A beautiful moon deity. Her mother Gaia, the ancient earth Goddess, hid her in a cave during a Titan attack on the Olympic deities to prevent her from being taken away.

Aine(Celtic) – Goddess of love, growth, cattle and light. The name of this Celtic Goddess means “bright” as she lights up the dark. Celebrations to this Goddess were held on Midsummer night

Anahita (Persian) – A river Goddess who was also Goddess of Venus and the moon. Her name means “pure” Or immaculate one” as she represented the cleansing and fertilizing flow of the cosmos.

Andromeda (Greek) – Although today she is linked with the stars many scholars believe that Andromeda was a pre-Hellenic moon deity.

Anunit (Babylonian) – Goddess of the moon and battle. She was also associated with the evening star and later became known as Ishtar.

Arianrhod (Celtic) – Goddess of the moon and stars, her name means “silver- wheel” the wheel of the year and the web of fate.

Artemis (Greek) – The Greek Goddess of the hunt, nature and birth. This maiden Goddess is symbolized by the crescent moon.

Arawa (African) – Lunar Goddess of the Suk and Pokot tribes of Kenya and Uganda. Her parents were the creator God Tororut and his consort Seta.

Auchimalgen (South American) – This moon Goddess was a Deity of divination and a protectress from evil spirits.

Bendis (Greek) – Bendis was the consort of the sun God Sabazius. Her cult flourished in Athens during the fifth century BCE.

Britomartis (Crete) – In addition to her lunar attributes she was also the patron Goddess of Cretan sailors.

Candi (Indian) – The female counterpart to Chandra, ancient Hindu lord of the Moon. The two were said to take turns: one month the Candi would become the moon and the next Chandra fulfill the role.

Cerridwen (Celtic) – This crone, Goddess is most famous for her cauldron of wisdom. She was the mother of the great bard Taliesin, and is deeply linked to the image of the waning moon.

Chang- O (Chinese) – The Chinese Goddess who lived on the moon She is celebrated to this day on full moon night of the 8th lunar month.

Coyolxauhqui (Aztec) – Aztec moon Goddess, her name means “Golden Bells.” She was the daughter of the Earth goddess, Coatlicue and the sister of the Sun god, Huitzilopochtli

Diana (Roman) – Diana was the Goddess of the hunt and wild animals. She later took over from Luna as the Roman Goddess of the moon, responsible for fertility and childbirth.

Gnatoo (Japanese) – One of twelve Buddhist deities called the Jiu No O, adopted from Hindu mythology.

Gwaten (Hindu) – She is derived from the Hindu God Soma, and is portrayed as a woman holding in her right hand, a disk symbolizing the Moon.

Epona (Roman/Celtic) – This horse Goddess was associated with the night and dreams. In western Ireland,legends still abound of hearing the hoof-beats of her horse as she rides west to escape the rays of the rising sun. She was also a Goddess of magic, fertility and feminine power.

Hanwi (Native North American) – Goddess of the Oglala Sioux, she once lived with the sun God Wi. Due to a transgression, she was forced by him to become a creature of the night.

Hecate (Greek) – A crone Moon Goddess, deeply associated with the waning and dark moons. She is depicted as haunting crossroads with her two large hounds, and carrying a torch, symbolic of her great wisdom.

Hina Hine (Polynesian) – This Hawaiian Goddesses name means ‘woman who works the moon’. In her myths it is said that she grew tired of working for her brother and fled to the moon to live in peace.

Hina-Ika (“lady of the fish”) Once again we see the link between the lunar Goddess to the tides.

Huitaco (South American) – This Colombian Goddess was a protectress of women as well as a deity of pleasure and happiness who was always battling with her male counterpart Bochica, a God of hard work and sorrow.

The crescent as a neo-pagan symbol of the Triple Goddess. (Photo credit: Wikipedia)

Ishtar (Babylonian) – Some myths say she is the daughter of the moon, others the mother.

Isis (Egyptian) – This powerful and widely worshipped Goddess was not only a moon deity, but a Goddess of the sun as well.

Ix Chel (Mayan) – A Central American moon Goddess and the lover of the sun. Poisonous snakes were her totem animal. She was also Goddess of childbirth

Izanami (Japanese) – This Goddess controlled the tides, fishing, and all destructive sea phenomena

Jezanna (Central African) – Goddess of the moon and healing.

Juna (Roman)- A Goddess of the new moon . She was worshipped mainly by women as she was the Goddess of marriage, pregnancy and childbirth. Her Greek equivalent was Hera.

Jyotsna (Indian) – A Hindu Goddess of twilight and the autumn moons.

Komorkis (Native North American) – The Blackfoot tribe celebrated her as the Goddess of the moon.

Kuan Yin (Chinese) – A Buddhist Goddess. Modern feminist Pagans believe she far pre-dates Buddhist origins. She was a Goddess of the moon, compassion, and healing,

Lasya (Tibetan) – A Goddess of the moon and beauty who carried a mirror.

Lucina (Roman) – A Goddess of light with both solar and lunar attributes. She was Christianized as St. Lucia, a saint still honored at Yule in many parts of Europe.

Luna (Roman) – An ancient moon Goddess, the namesake for the Latin word luna meaning ‘moon’. Her name also forms the root of the English words ‘lunar’ and ‘lunatic’.

Mama Quilla (Inkan) – As the Goddess of the moon she was the protectress of married women. A large temple to her was erected at the Inkan capitol of Cuzco. She was associated with the metal silver. Eclipses were said to occur when she was eaten and the regurgitated by the Jaguar Woman.

Mawu (African) – She ruled the sky with her twin bother, the sun God Lisa. To her people she symbolized both wisdom and knowledge.

Metzli (Aztec) – In Aztec mythology mother moon leapt into a blazing fire and gave birth to the sun and the sky.

Rhiannon (Celtic) – A Goddess of fertility, the moon, night, and death. Her name means ‘night queen’. She is also known as Rigantona.

Sadarnuna(Sumerian) – Goddess of the new moon

Sarpandit (Sumerian) – Goddess of moonrise. This pregnant Goddess’s name means “silver shining” referring to the reflective quality of the moon.

Sefkhet (Egyptian) – According to some myths this lunar Goddess was the wife of Thoth. She was also the deity of time, the stars, and architecture.

Selene (Greek) – A mother Goddess linked to the full moon. She is widely worshipped by Pagans today,

Sina (Polynesian) – This moon Goddess was the sister of the sun God Maui. She was sometimes called Ina.

Teczistecatl (Aztec) – A Goddess of sex, symbolized by the four phases of the moon: dark, waxing, full, and waning.

Xochhiquetzal (Aztec) – This magical moon Goddess was the deity of flowers, spring, sex, love, and marriage. She was the wife of storm God Tlaloc. She is also the patroness of artisans, prostitutes, pregnant women and birth.

Yemanja (Native South American) – She was the Brazilian Goddess of the oceans symbolized by a waxing crescent moon. Yemanja was also considered to represent the essence of motherhood and a protector of children.

Yolkai Estsan (Native North American) – A Navajo moon deity fashioned from an abalone shell by her sister Yolkai, the Goddess of the sky. She was the Navaho Goddess of the earth and the seasons, and is also known as White Shell Woman.

Zirna (Etruscan)- A Goddess of the waxing moon. She is always depicted with a half-moon hanging from her neck, indicating that she was probably honored at the beginning of the second quarter phase of the moon.